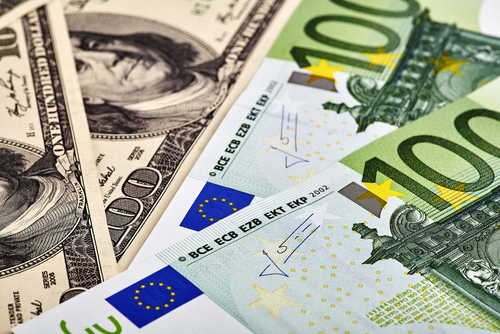 Friday 13th April saw the US dollar reach close to 6 weeks high against the Yen. This obviously occurred as a result of improved confidence by investors in the US economy as cooler heads prevailed in the call for caution over military action in Syria on Thursday 12 April. Additionally, improvement in investor risk appetite helped sustained US equities pushing US yields further higher.

The falling of the Japanese Yen, commonly perceived to be a safe haven asset, suggested that the results of a resolution to the near trade war between US and China and US President Trump’s announcement that a military strike in Syria may not be imminent bore fruits. These two near incidences had previously roiled the financial markets in previous days.

Equities in the US rose significantly in anticipation of encouraging corporate earnings and as tensions eased on the possibility of a US led war in Syria. As at the time of this writing, the S&P 500 had recouped nearly all the losses made from earlier in the year.

However, experts are of the opinion that assuming that the threat of a geopolitical conflict has passed is a sign of naivety. This means that despite talks between governments of the countries involved, there is still a possibility that geopolitical conflict may occur and this will have serious adverse effect on the financial market. But if the recent price action is anything to go by, the USD should be looking at more upper end trades in the coming days.

Shin Kadota, senior strategist аt Barclays suggests that even though the risk facing the markets as a result of potential conflict has been softened, they have not really gone away.

Senior FX strategist аt IG Securities іn Tokyo, Junichi Ishikawa suggests that there is need for more risk aversion in equities to reduce in order for the USD to remain strong, as there is still essentially a chance that Trump’s risk will dictate the markets.

There was little or no change in the dollar after economic data show that US job openings dropped slightly in the month of February. The monthly JOLTS report showed that job openings fell down to 6.052 million in February. Separate reports suggest that US consumer sentiment improved from a 14 year high on trade concerns.

Elsewhere, the Euro was only slightly affected at $1.2328 to the EUR after dropping 0.3% on the same Thursday ending a 4 day winning streak.

The Swiss franc, another safe haven asset, was slightly affected to drop to 0.9534 per dollar after losing 0.5% over the night. The Australian dollar, always sensitive to changes in risk appetite, rose 0.3% to $0.7777 while the New Zealand dollar remained steady at $0.7378.

The common currency rose 0.4% as a result of comments from ECB officials reinforcing expectations towards normalization in monetary policy. However, the threat of a China-US trade war still remains as the Wall Street Journal reports that the White House is looking at putting more pressure on Beijing due to the success of its previous hard line stance.

The Hong Kong dollar rose to 7.8499 per USD after interventions late Thursday and early Friday by the Hong Kong Monetary Authority pushed it away from the 7.8500 threshold where it was pegged, practically at the lower end of its trading band. This is the first time the HKMA will be intervening to rescue the lower end of the trading barrier since the band was introduced in 2005. The HKD reached its limit of trading band as a result of the steadily increasing US-Hong Kong interest rate gap.

The Singapore dollar on the other hand rose a little in response to the country’s central bank first tightening policy in 6 years. Although the currency eventually gave up its gains as the move was well anticipated. As at noon Friday, there was little change in the currency as it stood at 1.3122 to the dollar.