How To Handle A Burst Pipe

Despite the weather varying between neutral and pleasant, burst water pipe claims are on the rise. Clearly, it’s not just winter weather that warrants extra worry when it comes to taking care of your pipes.

Most associate burst water pipes with colder weather and this mostly holds true. Typically, uninsulated pipes are prone to freezing which causes the water inside to expand, increasing the pressure on the pipes and then bursting. The mechanism that causes a burst water pipe is similar, just in reverse – it’s the metal that expands in heat causing disruption. So, summer weather can be just as much of an issue as winter frosts.

Burst water pipes can cause extensive damage to a property through indoor flooding that’s very costly to rectify. The best way of preventing this from happening is by checking your pipes throughout the year, making this a habit even during the summer months. Look out for issues like rust, hard water, and bad installation to ensure that your property’s pipes are in top shape throughout the year.

The below infographic shows some of Hamilton Fraser’s research on summer pipe bursts and also shares our recommended best practice when it comes to dealing with a burst pipe and how to reduce the size of your landlord insurance claim. 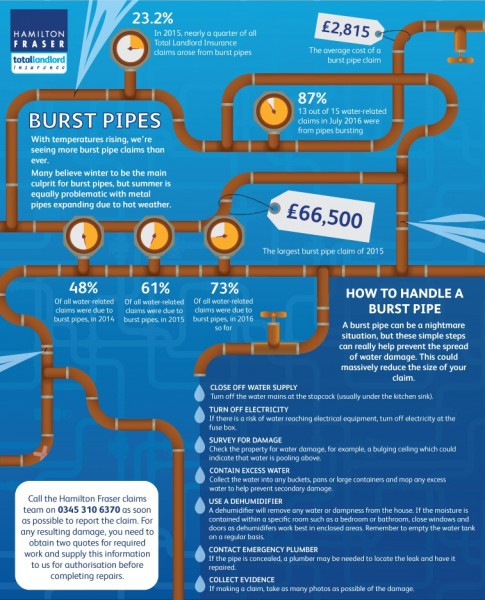