The growing trend of eco-designs has come from the drive for cleaner living and a more eco-conscious lifestyle. The growing media interest in our climate-changing world has made it more essential than ever to design with nature. This gives us great personal benefits such as better insulated properties that are some of the things we will be looking at today alongside some stunning designs from around the world.

Designing with a holistic approach is currently gaining momentum. This is the principle of integrating vegetation, food growing, and productivity areas quite literally built into the designs. While stunning and indeed structurally pleasing the increasing role of functionality constantly seems to push through to the surface.

Most of the top innovative designers of today are including technologies such as greywater recycling and other cross-pollination technologies like Aquaponics, and reed bed implementations to solve many of today’s wasted resources in a way that also increases productivity. This includes energy efficiency and environmentally friendly building developments.

The surge in popularity of green roofs has not just come from the practicality of growing your own produce or creating a living a breathing space for the world but also aesthetics and for increasing working pleasure and staff morale. Why would you build a boring office park where everyone is penned in for the day working when you could be sitting on the grassy terrace outside admiring the magnificent views on your breaks? When can you create living architecture with three giant biospheres? NBBJ is working with the Amazon organisation to revitalise three whole city blocks of Seattle’s Denny Regrade neighbourhood, with the HQ as the center sounded by multi-story, glass-enclosed biosphere workplaces containing tens of thousands of plants and trees from around the world.

Patrick Blanc’s world-renowned “Rainforest Chandelier” in Bangkok is the longest free hanging structure in the world totally covered by plants standing at 103 m long. Built for the luxury EmQuartier shopping mall renovation, the Spiral blade chandelier is suspended on stainless steel cables and planted with Ferns, Anthurium, Hoya, Cissus sicyoides, and many more from the French botanist.

Some stunning examples of projects from Across 5 Continents: 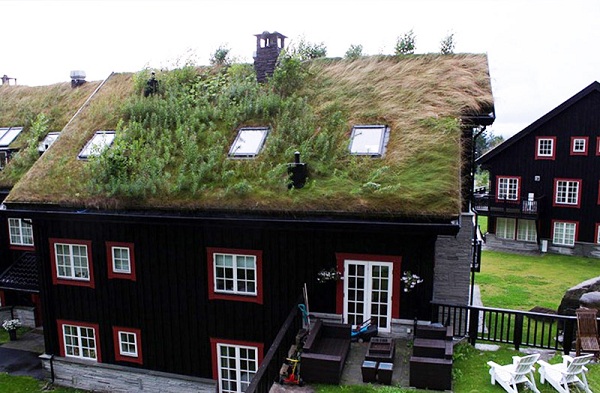 Norway has some incredible green roofs on its properties. The people of Norway are very eco-conscious and forward thinking, They have now become a long-standing tradition for the Norwegian people in fact during the Vikings and Middle ages many houses had sod roofs so this is an extension of that. Renowned green roof builders Isodren.no told us

“Green ceilings are very much in tune with the Norwegian attitude of looking after our planet and living in an eco concise way. They are of course very practical and beautiful at the same time. The advancement in technology and design helps to keep this movement going” – Green Ceiling Experts Isodren.no 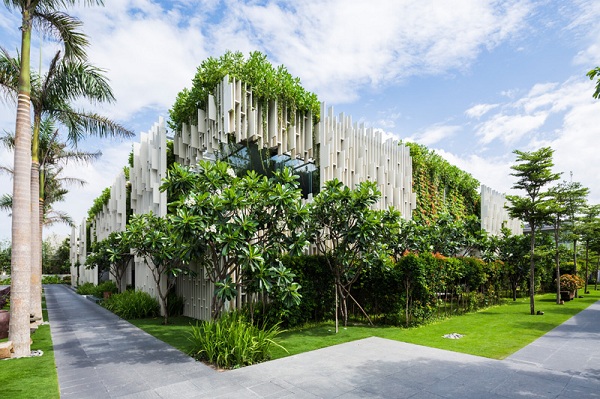 The Oasia Hotel in Singapore stands in stunning red aluminum mesh conceived as a living green tower at 190.15 meters with four sky terraces and the sky garden above, it integrates 21 species of creepers, plants and flowers. The landscaping is used extensively as an architectural surface treatment. The Atlas Hotel in Vietnam drips with vegetation. Vo Trong Nghia architects incorporated drapes of greenery to the 5-story balconies with plants overhanging each side of the building to reconnect guests with nature. The sheltered network of inter-connected courtyards is immersed in trailing plants. 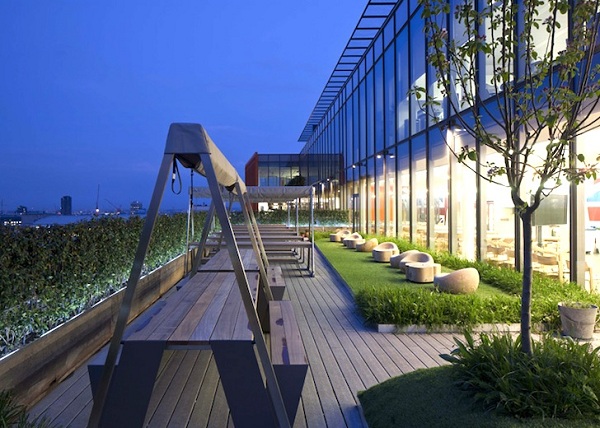 Another stunning example is Google’s London HQ which is a £1 billion “Landscraper” designed to be as long as it’s tall and intended to bring all Googlers into one area of 11 stories with a 300-metre long rooftop garden all to be stepped just like the building itself. The garden’s many zones include a “pause area” filled with wildflowers & woodland plants, a cafe, and 200m running trails.

The design of Beirut Terraces in Lebanon is influenced by layers of the city’s rich and tumultuous history. And the 119 m-tall high-rises of staggered plates are a large planted overhang whose lush vegetation offers privacy screens, creates cooler microclimates, and frames views. Yet still more is planned for the building in the construction phases. 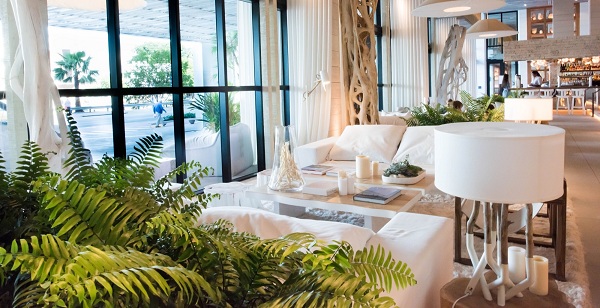 Here in this trendy and wealthy area of Miami are the spectacular Monad Terrace by Jean Nouvel in Miami Beach; One River Point Towers by Rafael Viñoly on the Miami River; and the Grove at Grand Bay by Bjarke Ingels of BIG

The designers the SWA Group are known for the firm’s iconic work on projects such as the Library of Congress Packard Campus and the California Academy of Sciences, some of SWA’s spectacular over structure green roofs are highlighted include the Burj Khalifa Tower Park in Dubai, UAE which is influenced by traditional Islamic patterns and currently the tallest building in the world; and the Shanghai Tower in China spiraling high with nine vertical zones and sky garden terraces at every 22nd floor. 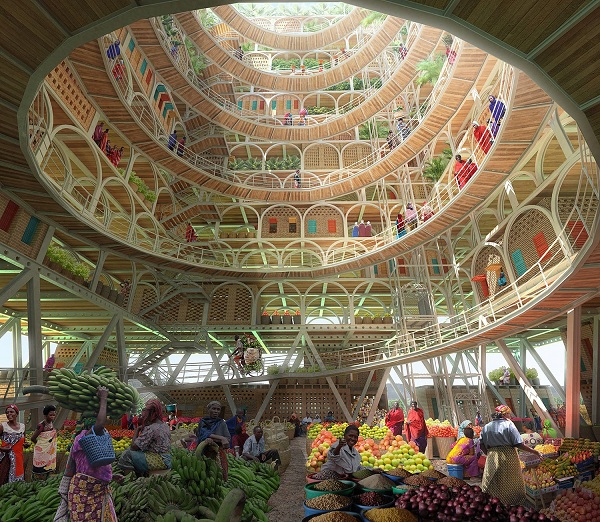 The Mashambas Skyscraper for Swahili, Africa is the 2017 eVolo Skyscraper Competition Winner, a mobile educational centre to introduce a “green revolution” providing education, seeds, and fertilizers and other technological innovation in water recycling and sustainable food production in the mix. The scalable skyscraper is conceived to reduce hunger in sub-Saharan where over 40% live in absolute poverty.

So there we have it incredible designs to keep you inspired to getting your own eco covering and fly the green flag.