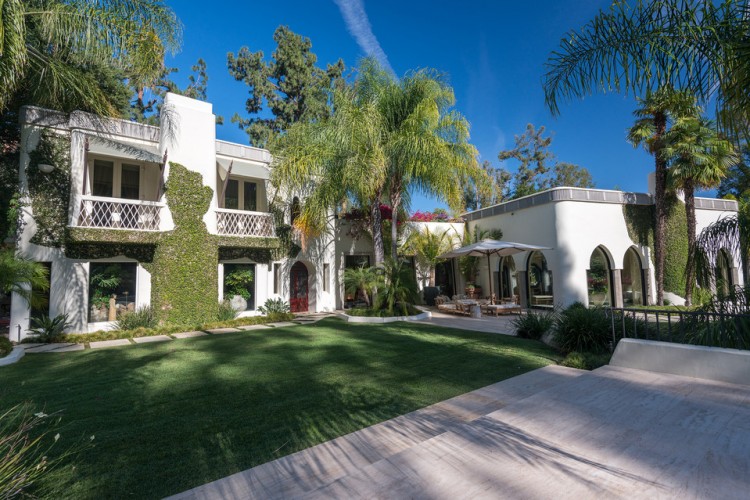 A lush Los Angeles estate that has among its previous owners, celebrities such as Cher and Eddie Murphy, is now available in the real estate market for an asking price of $85 million.

The gated mansion located in the Beverly Hills Post Office area measures up to 16 acres, says property listing agent Aaron Kirman, who works for John Aaroe group. He also said that the nearly 20,000 square-foot main home on the property is partly renovated, and the new owner would have to finish it before moving in. On the estate grounds include a four bedroom Moroccan-themed guest home, an equestrian barn, two riding strips, a lawn tennis court and large swimming pool.

It is public knowledge that in the 1980s, the house was owned by Cher, who sold it to Eddie Murphy in 1988. In 1995, the “Coming to America” star sold the estate to an undisclosed person who eventually sold it to late real estate developer, Raul Walters and his wife Vicki in the late 90s.

While the Walters lived in it, they bought four additional parcels of land surrounding plots the property, and also developed the guest house, the tennis court and the horse-riding facilities. According to Mr. Kirman, they also built a number of hiking and riding tracks. They then began an extensive reconstruction of the main house, but didn’t complete the project by the time Mr. Walters died in 2009.

Mr Kirman says, Raul Walters’ wife Vicki decided not to finish the project, so it would be up to the new owner to complete the kitchens, bathrooms and finishes.

Ms. Walters has decided to sell the house because she no longer lives in it, and has bought another property in the neighbouring area, said Mr. Kirman. She was not available for further comment.

This section was not always associated with Beverly Hills until in the 1960s. When Beverly Hills was amalgamated in 1914, the northern border was almost a mile on the north of Sunset Boulevard, except for the Trousdale Estates. Back then, the remaining area extending from the north to Muholland Drive was left as part of the Los Angeles hills, and was anonymous until 1963 when the area was included into the 90210 ZIP Code. This now forms the northern part of Beverley Hills.

Other Celebrity Residents in the Area

The post office area was once described in the 1980s as “almost Beverly Hills, for a lot less money”. However, in recent times, the sizes of homes and their price tags have risen higher than ever, according to some native residents and real estate developers.