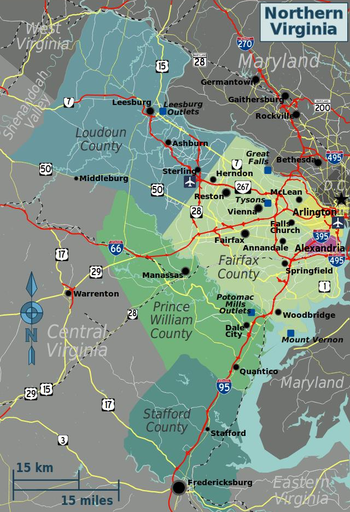 Northern Virginia, which is sometimes referred to as either NoVA or NOVA, is made up of several independent cities, regions, and counties within the Commonwealth State of Virginia. It is a rather widespread region that radiates to the west, out from the northern reaches of the state towards Washington DC.

Northern Virginia can be both a lovely and scenic place to live. It also has a rich sense of culture and history, having been part of the original thirteen colonies that founded the United States of America.

But, for those that are planning on moving to the area, it’s best to know about the actual neighborhoods and counties that make up Northern Virginia, before deciding on a final destination to live in.

Of course, choosing the best neighborhood to live in will be entirely dependent on your reasons for moving to the region, as well as who you’re moving with. But whether you’re looking for a nice area to start a family or moving because of a new job or career opportunity, rest assured that there’s a home for you somewhere in the NoVA region.

So, without further ado, let’s dive into our list of 5 great neighborhoods in Northern Virginia.

You can learn more about Northern Virginia real estate by visiting www.northernvirginiahomepro.com.

Not only is the county home to some of the biggest employers in the state, the area is also known for its highly respectable schools and government institutions.

So, for those who are moving to Northern Virginia to seek out employment prospects, Fairfax County should definitely be put at the top of your list.

Considered as one giant neighborhood development, Lake Manassas is a gated community that will cover an area of about 640-acres once completed. One tour through the area and you’ll instantly fall in love with both the beauty and serenity of the region.

To keep its denizens happy and occupied, Lake Manassas has three stocked fishing ponds, countless miles of hiking and walking trails, and for the golf-lovers out there, there are not one, but two highly-prestigious golf courses.

Also, because Lake Manassas is a gated community, it’s a place where people can feel safe about raising a family. Furthermore, the region has a tremendous amount of community involvement, so even if you’re new to the area, it’s easy to attend community events and get to know your neighbors.

The Hunter Mill District is a neighborhood found within Fairfax County, and offers an abundance of employment opportunities for those looking for work in the government, tech, or retail sectors. In fact, some of the biggest names in tech, such as Microsoft and AOL, have offices in the Hunter Mill District.

And, just like Lake Manassas, the Hunter Mill District is known for having a strong sense of community involvement. It hosts a wide range of festivals and events throughout the year. So, no matter what season it is, there’s always something for everyone to do.

Next, we have another Northern Virginia region where unemployment rates are low, and there are also plenty of technology jobs to be found.

In addition to its ample job opportunities, Ashburn, Virginia is known for its enticing city atmosphere. At any time of the year, you can find most area residents gathered at One Loudon, where you’ll find an abundance of local shops, restaurants, and venues for community events.

If you’re looking for a place to live with a historic, small-town feel to it, then Old Town Alexandria might just be the perfect neighborhood for you.

The historic region features a wide range of shops, restaurants, museums, and venues for everyone to enjoy. For an even more old-timey feel, you can take a ride of the area’s free trolley system, as opposed to getting around on foot or by car.

Planning a Move to Northern Virginia?

Northern Virginia can be a wonderful place to live for both families, as well as single professionals alike.

With its rich cultural history, there is sure to be a neighborhood in Northern Virginia for everyone to enjoy. Most neighborhoods in NoVA are known for having a substantial amount of community involvement, making them very welcoming places to live.