Property for sale in warsaw, Poland 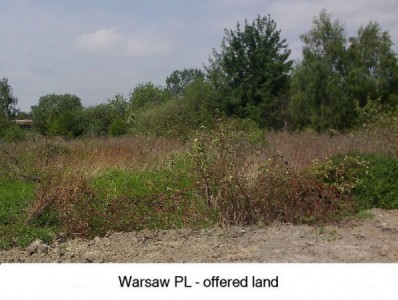 Estate of 1930 sqm, with development conditions consent, near Warsaw a

Undeveloped estate of with an area of 1930 sqm (roughly 55m x 35m), bare, located at junction of two streets (accessible from both...

Search property for sale in warsaw

We currently have 1 in warsaw including 1 House in warsaw , 1 Land in warsaw

You may want to use the following key words to help narrow down your search : House warsaw , Land warsaw

Warsaw ( WOR-saw; Polish: Warszawa [var??ava] ( listen); see also other names) is the capital and largest city of Poland. The metropolis stands on the Vistula River in east-central Poland and its population is officially estimated at 1.760 million residents within a greater metropolitan area of 3.101 million residents, which makes Warsaw the 9th most-populous capital city in the European Union. The city limits cover 516.9 square kilometres (199.6 sq mi), while the metropolitan area covers 6,100.43 square kilometres (2,355.39 sq mi). Warsaw is an alpha global city, a major international tourist destination and a significant cultural, political and economic hub .With a nominal GDP of $230 billion (PPP), it is the wealthiest capital city in Central and Eastern Europe alongside Berlin. Moreover, its historical Old Town was designated a UNESCO World Heritage Site.
Once described as Paris of the East, Warsaw was believed to be one of the most beautiful cities in the world until World War II. The German invasion in 1939, the massacre of the Jewish population and deportations to concentration camps led to the uprising in the Warsaw ghetto in 1943 and to the major and devastating Warsaw Uprising between August and October 1944. Warsaw gained the new title of Phoenix City because of its extensive history and complete reconstruction after the severe damage it suffered in World War II, which left over 85% of its buildings in ruins. On 9 November 1939, the city was awarded Poland's highest military decoration for heroism, the Virtuti Militari, during the Siege of Warsaw.
Warsaw is one of Europe’s most dynamic metropolitan cities. In 2012 the Economist Intelligence Unit ranked Warsaw as the 32nd most liveable city in the world. In 2017 the city came 4th in the “Business-friendly” category and 8th in “Human capital and life style”. It was also ranked as one of the most liveable cities in Central and Eastern Europe.
The city is a significant centre of research and development, BPO, ITO, as well as of the Polish media industry. The Warsaw Stock Exchange is the largest and most important in Central and Eastern Europe. Frontex, the European Union agency for external border security as well as ODIHR, one of the principal institutions of the Organization for Security and Cooperation in Europe have their headquarters in Warsaw. Together with Frankfurt, London and Paris, Warsaw is also one of the cities with the highest number of skyscrapers in the European Union.
The city is the seat of the Polish Academy of Sciences, Warsaw National Philharmonic Orchestra, University of Warsaw, the Warsaw Polytechnic, the National Museum, the Great Theatre—National Opera, the largest of its kind in the world, and the Zach?ta National Gallery of Art. The picturesque Old Town of Warsaw, which represents examples of nearly every European architectural style and historical period, was listed as a World Heritage Site by UNESCO in 1980. Other main architectural attractions include the Castle Square with the Royal Castle and the iconic King Sigismund's Column, the Wilanów Palace, the ?azienki Palace, St. John's Cathedral, Main Market Square, palaces, churches and mansions all displaying a richness of colour and detail. Warsaw is renowned for its bars, restaurants, art galleries and, most notably, several dozen museums and outspread greenery, with around a quarter of the city's area occupied by parks.