Property for sale in islamabad, Pakistan 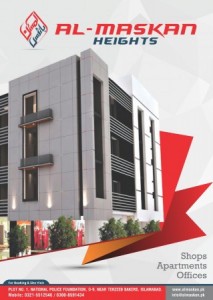 Search property for sale in islamabad

You may want to use the following key words to help narrow down your search : Commercial islamabad

Islamabad (; Urdu: ????? ?????, Isl?m?b?d) is the capital city of Pakistan, and is federally administered as part of the Islamabad Capital Territory. Built as a planned city in the 1960s to replace Karachi as Pakistan's capital, Islamabad is noted for its high standards of living, safety, and abundant greenery.With a population of 1,014,825 as per the 2017 Census, Islamabad is the 9th largest city in Pakistan, while the larger Islamabad-Rawalpindi metropolitan area is the country's third largest with a population exceeding four million. The city is the political seat of Pakistan and local government setup is run by the Islamabad Metropolitan Corporation, supported by the Capital Development Authority (CDA).
Islamabad is located in the Pothohar Plateau in the northeastern part of the country, between Rawalpindi District and the Margalla Hills National Park to the north. The region has historically been a part of the crossroads of Punjab and Khyber Pakhtunkhwa with the Margalla Pass acting as the gateway between the two regions.The city's master-plan, designed by Greek architect Constantinos Apostolou Doxiadis, divides the city into eight zones, including administrative, diplomatic enclave, residential areas, educational sectors, industrial sectors, commercial areas, and rural and green areas. The city is known for the presence of several parks and forests, including the Margalla Hills National Park and Shakarparian Park. The city is home to several landmarks, including the Faisal Mosque, the largest mosque in South Asia and the fourth largest in the world. Other landmarks include the Pakistan's National Monument and Democracy Square.Islamabad is a gamma-global city; it is categorised as very high on the Human Development Index, with an HDI of 0.875, the 2nd highest in the country after Lahore. The city has the highest cost of living in Pakistan, and its population is dominated by middle and upper middle class citizens. The city is home to twenty universities, including the Bahria University, Quaid-e-Azam University, PIEAS, COMSATS Institute of Information Technology and NUST. The city is one of the safest in Pakistan, and has an expansive surveillance system with 1,900 CCTV cameras.