Property for sale in hvar, Croatia 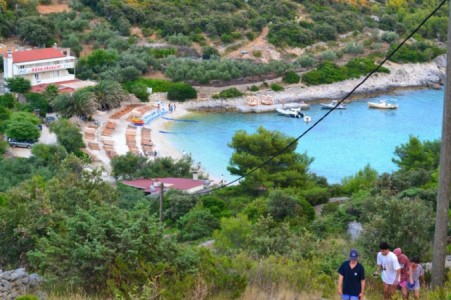 I sell a flat in the town of Hvar in a smaller modern apartment building. It is located on the ground floor and has open spaced ki...

House By The Sea, Secluded And Beautiful Place

A house at a secluded place and the only one in Sinjava Bay, first row next to the sea, in a beautiful bay in the northern part of...

Search property for sale in hvar

We currently have 2 in hvar including 2 Residential Property in hvar , 1 Terraced House in hvar

You may want to use the following key words to help narrow down your search : Residential Property hvar , Terraced House hvar

Hvar (pronounced [xv?â?r]; local Chakavian dialect: Hvor or For, Greek: Pharos, ?????, Latin: Pharia, Italian: Lesina) is a Croatian island in the Adriatic Sea, located off the Dalmatian coast, lying between the islands of Bra?, Vis and Kor?ula. Approximately 68 km (42.25 mi) long, with a high east-west ridge of Mesozoic limestone and dolomite, the island of Hvar is unusual in the area for having a large fertile coastal plain, and fresh water springs. Its hillsides are covered in pine forests, with vineyards, olive groves, fruit orchards and lavender fields in the agricultural areas. The climate is characterized by mild winters, and warm summers with many hours of sunshine. The island has 11,103 residents, making it the 4th most populated of the Croatian islands.
Hvar’s location at the center of the Adriatic sailing routes has long made this island an important base for commanding trade up and down the Adriatic, across to Italy and throughout the wider Mediterranean. It has been inhabited since pre-historic times, originally by a Neolithic people whose distinctive pottery gave rise to the term Hvar culture, and later by the Illyrians. The ancient Greeks founded the colony of Pharos in 384 BC on the site of today’s Stari Grad, making it one of the oldest towns in Europe. They were also responsible for setting out the agricultural field divisions of the Stari Grad Plain, now a UNESCO World Heritage Site. In medieval times, Hvar (city) rose to importance within the Venetian Empire as a major naval base. Prosperity brought culture and the arts, with one of the first public theatres in Europe, nobles’ palaces and many fine communal buildings.
The 16th century was an unsettled time, with the Hvar Rebellion, coastal raids by pirates and the Ottoman army from the mainland, resulting in some unusual fortified buildings on the northern shore to protect the local population. After a brief time under Napoleonic rule, the island became part of the Austrian Empire, a more peaceful and prosperous time. On the coast, harbours were expanded, quays built, fishing and boat building businesses grew. At the same time, the island’s wine exports increased, along with lavender and rosemary production for the French perfume industry. Unfortunately, this prosperity did not continue into the 20th century as wooden sailing boats went out of fashion, and the phylloxera blight hit wine production. Many islanders left to make a new life elsewhere.

One industry, tourism, has however continued to grow and is now a significant contributor to the island’s economy. The formation of The Hygienic Association of Hvar in 1868 for the assistance of visitors to the island has been instrumental in developing an infrastructure of hotels, apartments, restaurants, marinas, museums, galleries and cafes. Today, the island of Hvar is a popular destination, consistently listed in the top 10 islands by Conde Nast Traveler magazine.