Previously a destination for only a small number of tourists, this small but beautiful country has finally emerged from a brutal communist regime and has much to offer

For more than 40 years Albania was an authoritarian state, closed to the outside world and shrouded in secrecy under the iron-fisted rule of Enver Hoxha.

But now, following its transition from communism to capitalism, a fledgling international property market is developing in the small country which sits next to the Adriatic Sea, nestled between Greece and Montenegro.

Albania boasts 180 days of sun a year, a low cost of living, sandy beaches and a landscape laced with Greco-Roman antiquities.

The government is pursuing an agenda of socio-economic and political reform, and is aiming for future EU membership. The World Bank supports these efforts and to date has provided US$2.4 billion in credits, grants and loans.

Property prices have been increasing by approximately 20 per cent annually for past five years, and are expected to hot up further if Albania is allowed into the European Union. 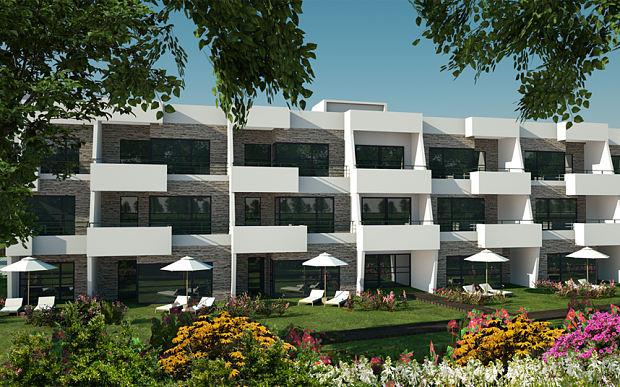 At present prices are about half as much as Croatia and a fraction of more established European markets. Compare the French Riviera where Savills research shows an average of â¬14,215 (Â£10,132) per sq m to Albanian coastal property at around â¬1,000 (Â£713) per square metre.

Albania is an emerging market, very much in transition. It is not a perfect international property destination and corruption remains widespread, in the property sector and beyond, although tackling this is high on the Government's agenda.

Regulatory reforms include an online land registry, new building codes and a nationwide programme of removing illegal buildings that have blighted certain stretches of coastline.

Peter Walshe, sales and marketing director for Lalzit Bay, a British financed and Australian designed Albanian coastal resort, said: "With EU entry on the horizon, the property market is becoming more transparent. But to avoid any hitches in the purchase procedure, it is paramount to take independent legal and tax advice."

The Lalzit Bay resort sits on 20 hectares of pristine land adjacent to Bishtarake, a 200-hectare protected nature reserve. The development is low density and low rise with a beach club, tennis courts and swimming pool joining the spa among the resort's planned facilities.

Just launched on a pre-sales basis are 23 villa plots of which 10 are front line and 13 second line, but staggered so all have sea views. Inclusive of villa, prices range from â¬349,000 to â¬499,000. All properties are sold on a freehold basis.

Carolyn Perry, a British archaeologist, has visited Albania on a regular basis since 2007. âFor me Albania has everything: beautiful scenery; remarkable historical sites; friendly locals; good food and wine. Not only that, the cost of living is very affordable and so too is property," she said.

Ms Perry has purchased a two bedroom apartment at Lalzit Bay which she says is a convenient base for her archaeological research and within easy striking distance from the Tirana International Airport. âI found the buying procedure very straightforward â and even easier than a previous purchase in Italy," she said.

The capital city Tirana, with its wide boulevards, leafy streets, parks and mixture of traditional, communist and post-communist architecture, is less than an hourâs drive from Lalzit Bay.

Prime property prices in the capital typically range between â¬1,500 to â¬3,000 per sqm,â according to Mr Walshe.

Are you looking to buy property in Albania ? Sarande , Durres , Vlore , Qarku I Vlorës , Saranda

Are you looking to rent property in Albania ? Durrës , Tiranës