A Tiny Basement Boiler Room in London Expected To Sell For £250,000

A boiler room in the basement of a block of flats in central London is expected to sell for a staggering Â£250,000 when it goes up for auction.

The shocking figure - which is enough to buy a HOUSE in most parts of the country - is for the two-room basement which was previously used to provide heating and electricity for residents.
With modern equipment shrinking in size over the years, the block now has enough free space for the basement to be sold off - and converted into a tiny two-room apartment.
It will have one bedroom, an en-suite shower room and an open-plan kitchen/living room, as well as a hallway with space to store a bicycle. 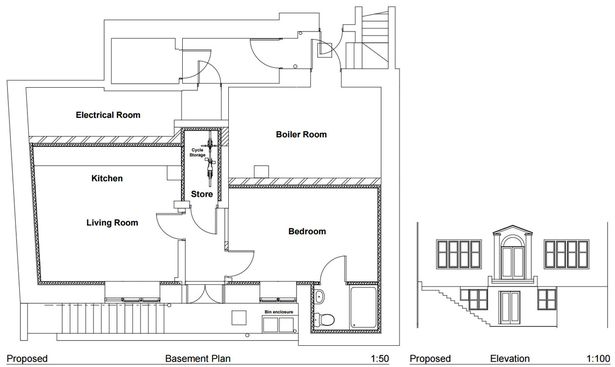 Unbelievably, the price is seen as a bargain, with the average property in the capital selling for more than Â£500,000.

The boiler room will be auctioned by Savills on December 14 at its London sale with the agent giving it an estimate of in excess of Â£250,000.

With 550 sq/ft, the finished flat is in the same Victorian apartment block, near Great Ormond Street, that an unexcavated basement recently sold for Â£150,000.

He said: âAlthough currently used as the boiler room, this 550 sq/ft basement unit has planning permission already in place for the creation of a one bedroom self-contained flat.

âLocated in Bloomsbury, a sought after area of central London where the average price of property has reached Â£768,669, this lot offers buyers an exciting development opportunity.â

The sale of the basement follows last weekâs announcement that the average home in London now costs Â£503,431 â up 10 per cent on 2014.

This double digit growth means the typical London homeowner saw the value of their house increase by Â£932 PER WEEK last year.

The borough of Camden, where the boiler room is located, now has an average property price of Â£847,321 â more than four times the average price in England and Wales.

But while prices go up, sales have gone down with transactions in the capital dropping 20 per cent year-on-year, according to the most recent figures from the Land Registry.

Experts blame a lack of supply as well and high prices which make saving for a deposit more and more difficult.

Simon Rubinsohn, chief economist at the Royal Institute of Chartered Surveyors, said: âActivity is subdued and this is due to a number of reasons, in particular the lack of supply.

âPrices are being squeezed up because of the lack of supply. It is a legacy of the last financial crisis which resulted in a shortage of house building.

âThe backlog of undersupply is now visible in the market and it will be interesting to see if the new developments help plug the gap.â

Jo Eccles, managing director of Sourcing Property, added: âIt is now very expensive to buy, sell, and trade up gradually, so people are moving homes fewer times and, therefore, there is less turnover of property.

âAffordability simply isnât there. Wages havenât risen enough to keep up with house price inflation and that has really hampered many buyersâ prospects of saving up for a deposit and getting onto the property ladder.â