Is this the Cheapest House in Britain?

Posted on 30/11/2015 By Nick Marr Categories: House Prices
A three bedroom house with new carpets and outside space has come onto the market for less than most buyers pay as a deposit.
The terrace house, in Burnley, Lancashire, has a price tag of just Â£9,000, putting it in the running for the title of the cheapest family home in Britain.
It has recently been decorated throughout and boasts new carpets as well as a new family bathroom.
The property also has a lounge with gas fire and surround, a dining room and a fitted kitchen. 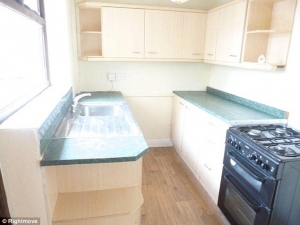 There is also parking available on the street and a small rear year.
With a 10 per cent deposit, buyers who could secure a mortgage with a rate of 2 per cent, such as HSBC's 1.99 per cent discount 90 per cent mortgage deal, would end up paying less than Â£40 a month.
It is in sharp contrast to a 10 per cent deposit of Â£20,000 on an average property worth almost Â£200,000.
The problem is that the Burnley house is so cheap; borrowers would struggle to find a bank or building society willing to lend such a small mortgage.
Mark Harris, chief executive of mortgage broker SPF Private Clients, said: âBorrowers looking for such a modest mortgage may have to hunt around for a lender as some have minimum loan sizes such as The Post Office's Â£25,001 and HSBC's Â£10,000. However, there are lenders who will consider smaller loan sizes, such as Santander which will lend from Â£6,000 or Halifax which has no minimum requirement.'
Property buyer Henry Pryor said that buyers are often far too aware of Britain's 'painfully high cost of housing in the sales and rental market'.
He said: 'There is certainly a housing crisis in London and in the South East, but in many other areas the costs of somewhere to live gobbles up close to 50 per cent of people's income.'
However, he went on to highlight regional differences, saying: 'As Phil Spencer's Channel 4 program suggests, it's all really about location, location, location. The market will determine what a property is worth between a willing buyer and a willing seller.
'In London it's more than Â£500,000 on average but that's because active buyers have access to large amounts of money to compete for a finite number of homes.'
He added: 'Property prices are not based on simple supply and demand however, but on the availability (or otherwise) of credit. Thirty year mortgages coupled by 3 per cent interest rates mean people who want to buy can borrow more. Building a million more homes is unlikely to make them cheaper or more affordable since real demand exceeds supply by a factor of ten in those areas where house price inflation is galloping away.'
The Â£9,000 terrace is in Burnley, near Manchester. It currently has a tenant, making it an option for investors.