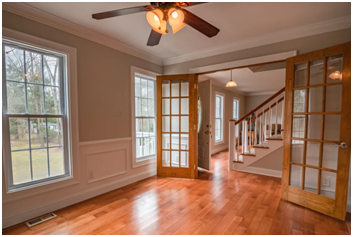 Whether you’re looking to lower your heating and cooling costs, or you live in a region where air conditioning isn’t the norm, ceiling fans can help keep your home cool in the summer and warm in the winter. According to the University of Florida Cooperative Extension, you can cut the cost of cooling a single room by as much as eight percent if you just put in a ceiling fan. If you don’t have air conditioning or want to put off turning it on for as long as possible, a ceiling fan can really help you beat the heat.

But, for the heating and cooling effects of a ceiling fan to be most effective, you need to make sure you’re buying the right ceiling fan for your room and needs. Fan size, blade angle, reversibility, and indoor/outdoor capabilities should all be considered.

When you’re installing one ceiling fan or several, you need to size each fan correctly for the room it’s going to be in. A fan that’s too small won’t be powerful enough, and a fan that’s too large will be too powerful and might present a risk of head injury, besides.

How do you measure fan size? You can measure fans with an even number of blades straight across, from one blade tip to another. If the fan has an odd number of blades, measure from the center of the fixture out to the tip of the fan blade, and multiply that number by two.

Your fan blades have to be at the right angle in order to effectively move air. For most small- to medium-sized rooms, choose a fan with a blade angle of 12 to 14 degrees. A blade angle of 16 degrees or higher may be too powerful for all but the largest rooms, or for outdoor spaces in hot climates. A blade angle below 12 degrees may not move enough air to make a noticeable difference.

Adjust the Blade Direction of the Fan as Needed

Ceiling fans don’t really cool the room, but they create a breeze that can make occupants feel cooler. Many ceiling fans have a switch that allows you to reverse the blade direction, to help keep rooms warmer in the winter -- the reversed blade direction forces warm air that has risen to the ceiling down into the room. Reverse the direction of the fan in cold weather to help lower heating costs. Set the fan to push air downward in the summer to help keep your home feeling cooler. 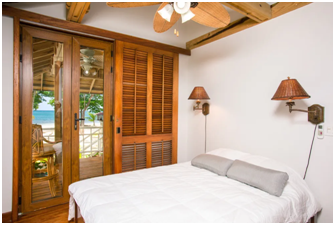 If you don’t want to be constantly hitting your head on your ceiling fans, you need to make sure you have plenty of clearance for them. This won’t be as much of an issue if you have high ceilings, but if your ceilings are only eight or nine feet high, then you’ll need to be careful. Your fan needs at least eight inches of clearance between the blades and the ceiling to circulate air adequately, and there should be seven feet of clearance between the blades and the floor to prevent fan-related concussions.

Of course, there are some situations where you can hang a ceiling fan lower. If you’re not going to be walking around under the fan, you don’t need as much head room. In a dining room or bedroom, you can hang a fan much lower over the bed or dining table, for example.

For many homeowners, the whole point of buying a ceiling fan is to save on heating and cooling costs, so once your fans are installed and running, tweak your thermostat if you have central air conditioning. You should be able to turn up your thermostat by at least a few degrees and still stay equally comfortable, not that you have a fan to move the air around. In the winter, experiment with turning the thermostat down a few degrees and reversing the direction of your fans.

Ceiling fans can do a lot to reduce your heating and cooling costs if you use them right. Plus, they’re just a nice feature that many homeowners love -- and they’ll make your home more marketable when it’s time to sell.